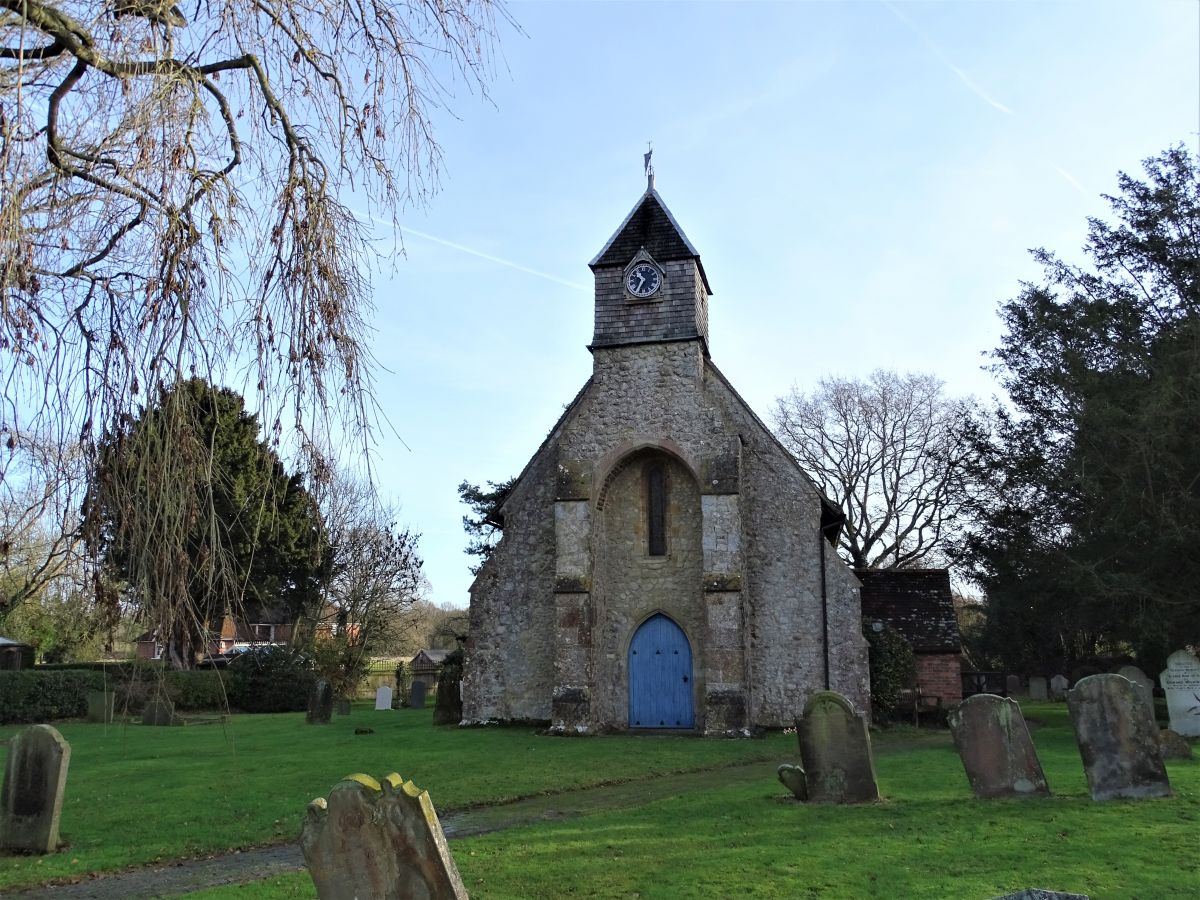 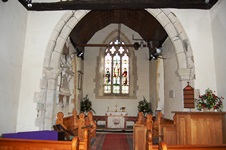 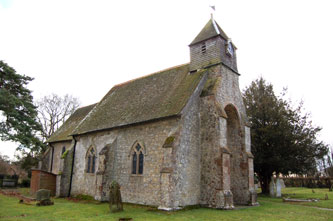 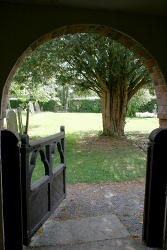 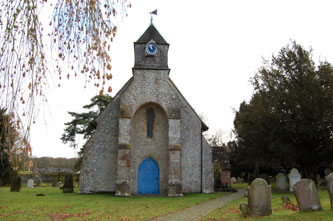 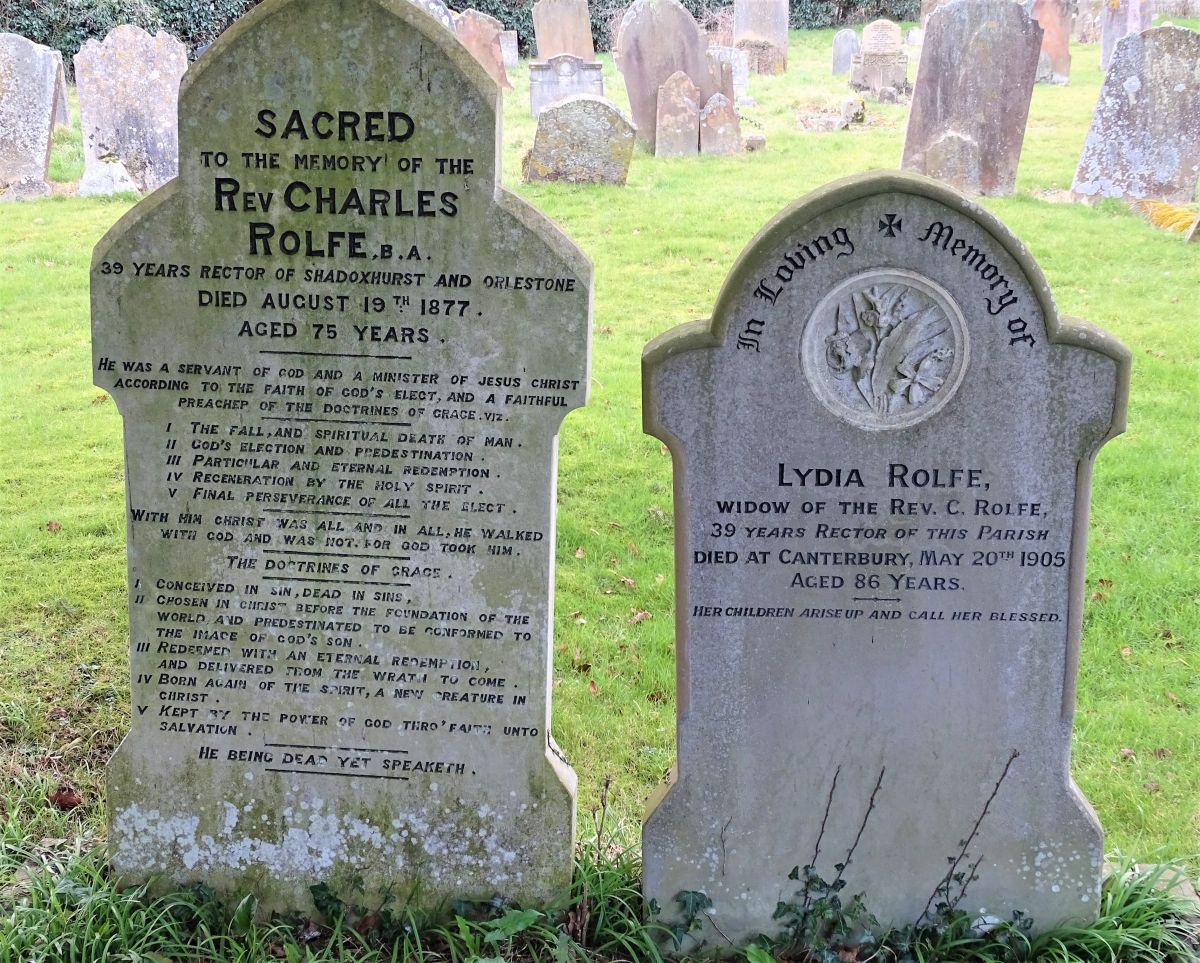 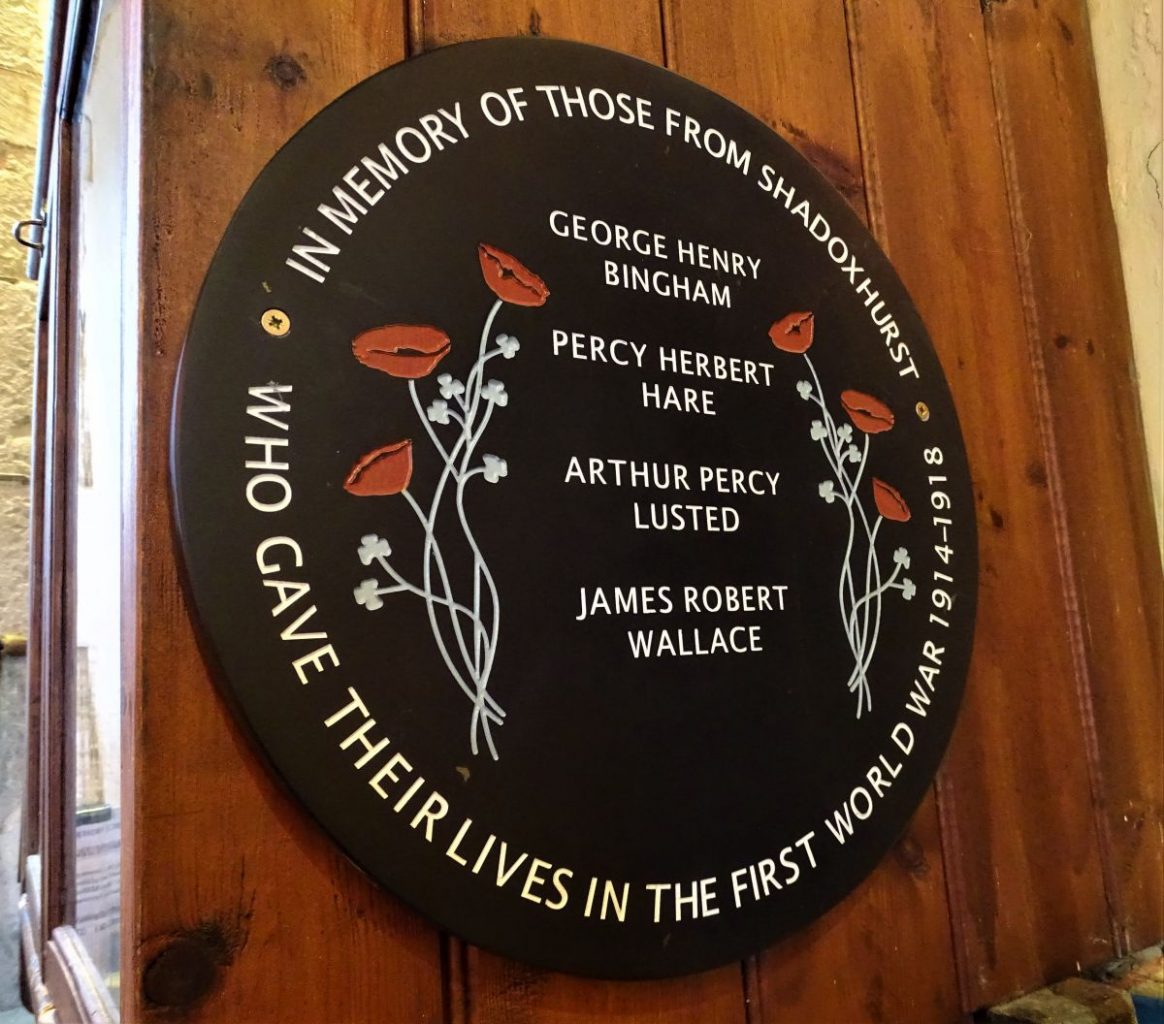 LOCATION: Situated at c.130 feet above O.D. near a small `green’ at the centre of a dispersed Wealden village about 4 miles S.W. of Ashford. It is on Weald Clay with a Paludina limestone outcrop only just over a mile to the north-west.
DESCRIPTION: This is a simple building with only a nave and chancel, and almost all the features in it are of the early 14th century. Only the north and south lancets in the chancel suggest that this part of the building is late 13th century. There is no other visible evidence for an earlier church.
The late 13th century chancel has tall wide lancets (of Ragstone and with some Caenstone) with window seats inside the south lancet (as in contemporary domestic architecture), which presumably acted as the sedilia. The seats are chamfered out at the top, and on the chamfered internal arises there are bar-stops. All the masonry exhibits comb-chisel work. The north lancet just has a simple internal ledge, and the aumbry niche immediately to the east (without its door) may be contemporary.
The nave appears to have been completely rebuilt in the early 14th century with three buttresses on either side (most of the chamfered plinths are buried below the external drainage gulley). Two larger western buttresses were added to the west wall which support an added west arch which in turn supports the western part of a small timber-turret for 3 bells (though only one 1592 bell survives). The western buttresses are notable for their use of Bethersden marble `long and short’ work in their quoins. Bethersden marble has also apparently been used in the voussoirs for the arch above, as well as in the lowest quoins in other buttresses in the nave and chancel. All the other quoins are of Ragstone (with quite a few restored weatherings of Bathstone), and all the main walls are of Ragstone rubble.
On the north and south sides of the nave are two pairs of two-light early 14th century windows with trefoiled heads and ogee quatrefoils above. The north window tracery is slightly different from that on the south, though the latter tracery is entirely restored in Bathstone. There are simple external hoods. The south and west doorways (with 19th century doors) are also early 14th century with simple mouldings and pyramid stops.
An unusual feature is the large Ragstone brackets (perhaps for images) in the east jambs of the north-east and south-east nave windows. There is another smaller corbel in the south-east wall of the nave. There is also a simple chamfered early 14th century chancel arch, and the cinquefoil-headed piscina in the chancel and 3-light east window (with reticulated tracery) are also early 14th century additions. There are contemporary eastern ragstone buttresses, also with Bethersden marble at the base.
The plain hexagonal font at the south-west corner of the nave may also be early 14th century, though the crown-post roof over the nave is perhaps a bit later. There is also a medieval simple collar and rafter roof over the chancel (see eaves), but this is boarded in.
There is an 18th century south porch (completely rebuilt in 1985), and two bells were apparently removed from the western turret at the end of the 18th century when it was rebuilt.
The main, fairly thorough, restoration came in 1868-9. No early fittings, except the font, survive inside the church. The ancient glass in the east window was apparently reset in a new western lancet at this time.
The nave was refloored in 1964-5 after dry-rot problems, and given a new pulpit, etc., new pews (reconstituted) were acquired in 1977.
BUILDING MATERIALS: (Incl. old plaster, paintings, glass, tiles etc.): The main building material is local Ragstone with some imported Caenstone in the late 13th century lancets. Much fine Bethersden marble slab was used for early 14th century quoins, while Bathstone was used in the 19th century repairs.
There is some ancient render on the external north wall of the chancel, and north-east side of the nave.
The two northern quatrefoils in the nave contain ancient glass (probably in situ), and more has been reset in the west lancet.
EXCEPTIONAL MONUMENTS IN CHURCH:
Memorial to Capt. Sir Charles Molloy on north wall of chancel (by Cheere, according to John Newman), with his armorial `achievements’ on a bracket on the south wall facing it.
CHURCHYARD AND ENVIRONS:
Size & Shape: Quite large irregular area around church.
Condition: Good
Building in churchyard or on boundary: Semi-derelict school-building (of 1846) on west boundary. (Bethersden marble slabs in path outside W. gate to churchyard.)
HISTORICAL RECORD (where known):
Earliest ref. to church: ?Late 13th century.
Late med. status: Rectory
Patron: The Crown.
Other documentary sources: Hasted VII (1798), 242-4. Test.Cant. (E.Kent, 1907), 303-4 mentions burial in the churchyard from 1474. Also the Rood light and lights to St Mary (in the chancel at the high altar end and in the body of the church (i.e. nave) and St Katherine, St Matthew & St Peter.
SURVIVAL OF ARCHAEOLOGICAL DEPOSITS:
Inside present church: Probably good.
Outside present church: Good – drainage gulley is above G.L.
RECENT DISTURBANCES/ALTERATIONS:
To structure: South porch rebuilt 1985.
To floors: Nave refloored in 1964-5.
Quinquennial inspection (date/architect):
ARCHAEOLOGICAL AND HISTORICAL ASSESSMENT:
The church and churchyard: A late 13th century chancel with north and south lancets, rebuilt in the early 14th century along with the whole of the nave. A Major restoration in 1868-9.
The wider context: One of a group of Low Weald churches using Bethersden marble.
REFERENCES: S. Glynne, Churches of Kent (1877),211. He visited in 1859.
Guide Book: Brief leaflet.
With thanks to: KENT ARCHAEOLOGICAL SOCIETY — Studying and sharing Kent’s past
DATE VISITED: 23rd April 1994 REPORT BY: Tim Tatton-Brown
This website cookies to improve your experience. Accept Settings Read our Cookie Policy
Privacy & Cookies Policy