Operation Sceptre saw a range of measures used around the county to detect and arrest those who carry knives, recover potential weapons and educate the public about the risks.

More than 40 weapon sweeps were carried out in parks and other public places to remove any bladed objects which may have been hidden away. These led to 11 knives being recovered.

Surrender bins placed around the county, including two new bins in Folkestone, also had 72 knives placed in them, with all of those handed in now removed from circulation.

Detective Superintendent Shaun White said: ‘Every one of the knives recovered during this week of action is a potential weapon that could have been used to threaten or harm people in Kent.

‘I am pleased work by our officers has removed such a large number of knives from our streets and I hope the sweeps carried out and arrests made will prevent future offences in our communities.’

Also as part of Op Sceptre week, 22 schools were visited, with over 1,300 pupils given advice on the risks of becoming a victim, of being arrested or getting a criminal record should they carry weapons.

Stalls were also set up in town centres to engage with communities about their concerns and educate the public on how they can assist Kent Police in our work tackling the issue.

More than 40 shops were also visited to ensure they are aware of the rules around knives. These now include the Offensive Weapons Act 2019, which came into force in July this year and makes it illegal to possess certain dangerous weapons, even in private.

Det Supt White added: ‘Knife crime remains relatively low in Kent compared with other areas of the country and the number of offences involving a knife in Kent fell between 2019 and 2020 and is on course to fall again this year.

‘Kent Police is not complacent however and we will continue working, every day of the year, to tackle knife crime and address the reasons people carry knives.

‘My advice remains the same: Don’t carry a knife. It could lead to you getting injured or being arrested and charged with a serious offence. If you know anyone who carries a knife, tell them of the risks and get them to bring it to a police station or drop it in a knife bin. If not, tell us and we will take action.’ 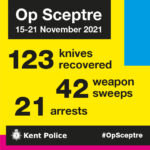